This is seventh year that the Chehalis Canoe Family participated in “One Heart, One Mind” on the Canoe Journey with “Tu-lap ti weah”, a twenty-seven foot ocean canoe. The Canoe Journey is a traditional and spiritual journey on the ancestral waters by the First Peoples of the Northwest Coast, and is a feat requiring mental, physical and spiritual readiness. The Canoe Journey creates opportunities for tribal members to re-learn, strengthen, and reinforce their canoe traditions. There are many cultural values that are learned from the canoeing, including pride, cultural knowledge, learning how to paddle, respect, and sense of achievement. This year was the Paddle to Quinault, who previously hosted in 2002. The Chehalis Canoe Family joined the journey in Lower Elwha and ended at the beach in Quinault at Point Grenville. 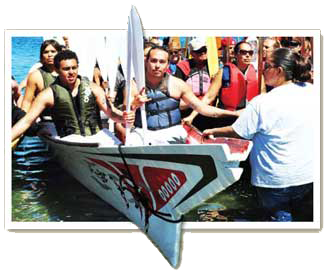 The Chehalis Canoe Family arrive at Makah and wait to ask permission to come ashore.

The Chehalis Canoe Family worked together throughout the year in preparation for the Canoe Journey. Fundraisers are instrumental to a successful journey, supplying necessary resources to achieve this goal. There was also some practice pulling sessions in the Sound, and surf training on the Quinault beach. This was the first time the Canoe Family had travelled on the ocean, as it is well known to be quite dangerous and unpredictable. Fortunately, Vern Ward Sr. came forward and was selected as the skipper for this year’s journey. Vern provided some much-needed experience as he is Quileute/Muckleshoot and has worked on the ocean, where he primarily fishes and goes crabbing.

There was singing, drumming and dancing practice before the journey began, as well as in camp while travelling to each hosting tribe along the coast. It was a good time to gather and gain strength from each other. It is a cultural experience, with each member required to donate ten items for the giveaway during final protocol in Quinault. Some were seen beading their regalia, or working on some handmade gifts. Others could be found at the protocol tents either in a jam session or protocol, listening to the words of the elders as they shared their wisdom.

The rough ocean surf created challenges as canoe families landed on the south beach in Queets. Tulap and her crew arrived safely, but a few canoes tipped over as they came ashore.

Communication is crucial for a successful journey. Chehalis Canoe Family “Circle Up” would echo across camp. Family members would cease what they were doing to discuss the activities for the day, establish safety rules for the children, and keep the camp clean. Skippers would select their pullers for the next day and they were required to ensure they had food, drinks and snacks ready. Staying hydrated is essential for safety and strength.

Safety is critical while travelling on the water. This year Muckleshoot provided their support boat while travelling in the Straits of Juan de Fuca. After leaving Makah the Quinault Tribe provided support for all the canoes travelling south along the coast. The ocean is less predictable than the rivers, and Quinault requested that all canoes travel at the same speed for safety. The tall ships Lady Washington and Hawaiian Chieftain were invited by the Quinault Nation to escort the ocean going canoes from Neah Bay to Quinault.

Landing was a different challenge for many canoes as they came ashore. Pullers power-pulled around rocks, waves, and wind as they landed on the beach at each hosting location. A few mishaps occurred, as a few canoes flipped in the rough surf, but thankfully everyone arrived safely. Safety is always a key focus at this event. It is an exhilarating experience and pullers agreed they were tired, but it was rewarding to feel the power of the ocean. Families of the hosting tribes, sang and drummed before the visiting canoes requested to come ashore.

Final Day on the Water

As the traditional ocean-going canoes came in from both the north and south a large crowd came to witness this momentous occasion and greeted them. One by one the canoes were welcomed ashore by Quinault Nation leaders, dancers, and singers as they rode the Pacific waves in, completing their journey. Sixty-nine canoes landed on Thursday, August 1 on the Quinault Tribal Beach.

After a few hours of traditional welcoming and landings, it was time for the host to feed the Canoe Families and the thousands of guests that came to enjoy potlatch activities. This was a week long activity for Canoe Families to thank, share songs and dance with each other honoring the Quinault Nation. The theme this year was “Honoring our Warriors!” Recognizing and honoring our Native Veterans for their patriotism.

The royalty and leaders of the Quinault Nation greeted each Canoe Family as they came ashore at Point Grenville and over 10,000 spectators to witness this aweinspiring event.

Each of the Canoe Families was dressed in their regalia and shared their Canoe Family songs, drumming, and dancing. Gift giving and special recognition honored council members, veterans, support boats, skippers, and youth for all their hard work and commitment in preparation to host this year’s Canoe Journey. All of this was live-streamed online for those who had prior commitments and could not attend these activities.

A protocol list was available at the protocol tent and on Monday morning the Chehalis Canoe Family’s turn came. They practiced every night in preparation for this moment to take the floor and honor the Quinault Nation for their hard work in hosting this year’s Canoe Journey. At times we could hear our youth, from the youngest to the oldest, singing amongst themselves, which was phenomenal. Our performance was small in comparison to the task they took on. Drumming, singing, and dancing the Canoe Family’s songs is a cultural experience that is hard to explain. But it was exhilarating knowing that when we finished, we had represented the Chehalis Tribe with honor and respect. It was a great morning!

Our hands go up to the Quinault Nation for hosting this year’s event. Next year’s journey is to Bella Bella!

Originally published in our Chehalis Tribal Newsletter,
August 2013 which can be downloaded below. 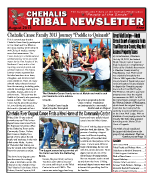